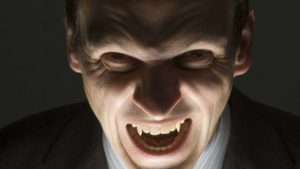 Do you remember the vampires at the movies before Buffy came along and sexualised them? Before Twilight romanticised them? The original vampire was an evil creature of the night which sucked the blood from its victim leaving them dead or turning them into a monster like themselves. They were evil! They sucked the blood from the victim until they had no life! And, the desire for blood was something they could never sate.

This is probably a perfect definition for the 2015 property developer; one who creates the vision of a development, sells it to victims off the plan, promising them that they will reap the rewards, and then uses a sunset clause to rescind the contract and on sell the property for a profit.

It is not blood that they need to quell their thirst, but money. Even then, the greed of the 2015 developers could not be sated by mere profit, but could only be quenched if they were able to reap every dollar from a deal showing no regard from the damage to their victims. They are a modern vampire, often dressed in suits, which donâ€™t need to go through any transformation to become a money sucking monster. Their thirst and greed is plain for all to see.

In steps our hero, Victor Dominello, the Minister for Fair Trading. What a perfect name for a character in a vampire movie. Whilst the old movies had Charles Bronson; we now have Victor Dominello. Whilst in the old movies, garlic and the cross could ward off vampires; it remained only a stake to the heart that would kill them. Our hero, Mr Dominello, has revealed his cross and the garlic but not the stake.

For those who were asleep in 2015, let’s update you a little:

Contracts always contain a standard sunset date by which the vendor should achieve registration. If registration is not achieved by that date, either the vendor or the purchaser can rescind the contract without penalty. Developers utilise this clause by dragging their feet and going past the sunset date and rescinding the contract and then on selling the property for a profit. The victim was sold to in the slow period and now had no choice but to seek out alternate properties in the rapidly growing property market. In fact, many of the victims were no longer able to re-enter the area in which they originally purchased.

An amendment was made to the Conveyancing Act in 2015 to protect purchasers. The legislation simply stated that the only way a contract could be rescinded were:

This then required a developer to go to the courts to obtain a rescission of the contract. The court would only grant such a rescission if it was inequitable. While not fully defined, the court was required to make considerations for possibilities of windfall to the developer, reasonable delay and bad faith. The greater disincentive was that, provided the purchaser has acted reasonably, the vendor would be required to pay their own legal costs and the legal costs of the purchasers.

Leverage conducted a number of cases protecting consumers in this environment, one of which has received great protection from the changes in legislation. It has had a beneficial affect on the fair minded person. The decent vendors who had been seized by greed, backed off. As a solicitor on the other side said to me, â€œwe donâ€™t want to be the first in court and we don’t want to risk a judge considering a rescission notice when our client will benefit from itâ€. The change in legislation has consequentially brought about a change in the market place. We have consumers who have benefitted greatly from the amendment and are rightly thankful to the minister for his amendments.

Unfortunately, the amendments didn’t do enough to quell the greed. Minister Dominello did not take a stake and drive it through the hearts of the vampire developers. The chronically bad ones are still lurking around.

Leverage has a client who is involved with a development, again in the Hills area. Their contract has not been rescinded but they have received correspondence from the developer offering them an extension on their contracts if they pay him an extra sum of money. He has indicated that if they donâ€™t pay him the extra money, the developer will take them to the Supreme Court and get the properties rescinded. In this case, the legislation has not quelled his greed but merely provided a challenge.

There is, however, a vastly more evil case which we have come across. This is a development which was created and sold to forty consumers. Because the amendments in legislation have come in, they have determined another approach. The legislation was never meant to stop Mortgagees from on selling property and thereby rescinding contracts and receiving a benefit from it. In other words, if a bank lent money to a developer to build a property, the banks could on sell the property if they defaulted and rescind all the contracts, getting the ultimate benefit of any increase of value in the property market. This is a deliberate determination by the Minister to not affect the banks.

Unfortunately, the banks are not the only people who earn money. There are a number of organisations out there that are happy to lend money, create a mortgage, and appoint a receiver as a means of rescinding the contract.

The amendments to the Conveyancing Act 1919 were needed and have had a positive effect for consumers throughout the developing industry. However it has not gone far enough to kill the greed. To stop consumers from being used to obtain finance to create a development, and to lose their benefit later on, the laws should have quashed the greed completely. The laws should have said that no person is allowed to rescind a consumer contract and on sell at a higher price. This would have attacked the driving force behind these rescissions, which is the greed.

Developers are well known to be the vampires of the property industry. The cross and the garlic have been shown, but the stake has been put away for a later date.