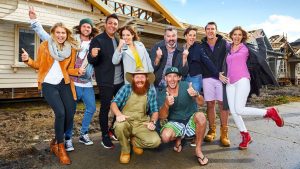 On Halloween, Leverage sponsored the annual LSN convention held at the ICC in Sydney. LSN (List Sell Negotiate) is a conference organised by the offices of Josh Phegan and Damien Cooley. Leverage was one of the gold sponsors of this event, which permitted us to spend some time listening to the speakers.

Dane Atherton from Harcourts spoke about how sexy the industry had become: The Block; Saturday afternoon on Fox Business; and, the live streaming of auctions by Domain. Real estate has become a sport where Auctioneers and Agents have become stars.

Dane was able to point to the fact that everyone is watching Real Estate and the auction process. It has become a spectator sport where winners and losers are defined.

This reality TV is ostensibly less and less real. If you look to The Block, we can easily see how reality has been removed from Reality TV.

Reserves were set; some were between 2.52 and 2.62 million dollars. Our research from local agents indicate that the estimated selling price was between 2.2 and 2.4 million. This meant that the reserves were set with no consideration of the reality of true pricing.

The Block properties receive unprecedented marketing through the term of the shows programming. No property, in reality, ever receives that form of marketing. Moreover, no vendor could ever afford such a level of advertising.

The program also makes champions of those who get the highest priced property. It brings people to the table that would buy a property for notoriety and not necessarily investment.

This lack of reality has turned real estate into a sport. It fails to acknowledge that real estate is important because it deals with real people and their real issues. In Australia, the house is where most of our hard earnings go. If a vendor is caused to lower a reserve, it affects the future in terms of where they live. If a purchase pays over the value, it affects their family and the time they live in the house. Higher mortgages may mean less money being spent on education, and other lifestyle pursuits.

Real estate is a serious business about serious things that happen in people’s lives. It’s not sport. It most of all, is not something that should be spectatorship. The spectators may be voyeurs of people’s disasters.